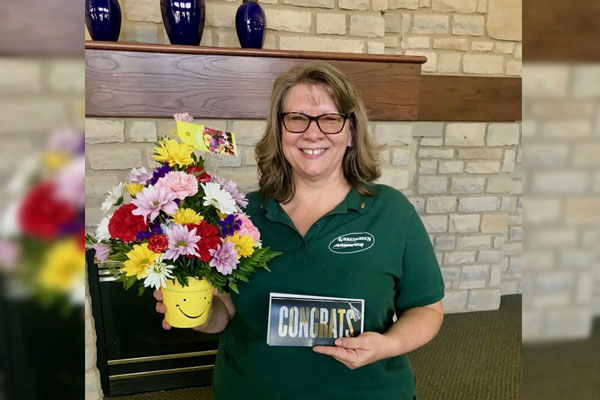 Kettering, Ohio, September 16, 2020 – Day Air Credit Union is excited to announce that its Beavercreek Branch Manager, Tracy Jaudon, has led GreeneBucs, The Greene County, Ohio Chapter of AMBUCS, to be named the top-performing AMBUCS chapter nationwide for the 4th consecutive year. Jaudon has been President of GreeneBucs for two years; under her leadership, the chapter has improved the lives of countless children with disabilities living in the Miami Valley.

AMBUCS, LLC. is a non-profit charitable organization with a diverse membership dedicated to inspiring mobility and independence. Through its nationwide network of over 160 volunteer chapters, AMBUCS provides Amtryke adaptive trykes, scholarships and many forms of support for children with disabilities.

“Tracy is a leader in our organization and develops meaningful relationships with members whom she serves,” Day Air Chief Experience Officer and Senior Vice President Jannell Eichstaedt said in a statement. “I am proud, happy and not surprised in the least that under Tracy’s leadership the GreeneBucs chapter was named the top-performing chapter in the country four years in a row.”

Tracy has been the Beavercreek Branch Manager for Day Air Credit Union for more than five years and a member of GreeneBucs for the past three years. “After attending one meeting for GreeneBucs and seeing the work they do, I was hooked,” Jaudon said. “We’re changing lives, one Amtryke at a time!”